There is no proper division between a knife Vs sword. In general, a knife is a simple tool that has a blade and handles. Its main use of cutting things, such as a rope on camping, fruit, veggies, and meat at home, wires in offices, etc.

However, a sword is a weapon with a design that supports stabbing and thrusting. You can use it for attacking someone in a setting that requires it. Other than this, a sword has two sharp edges, while a knife has only one. 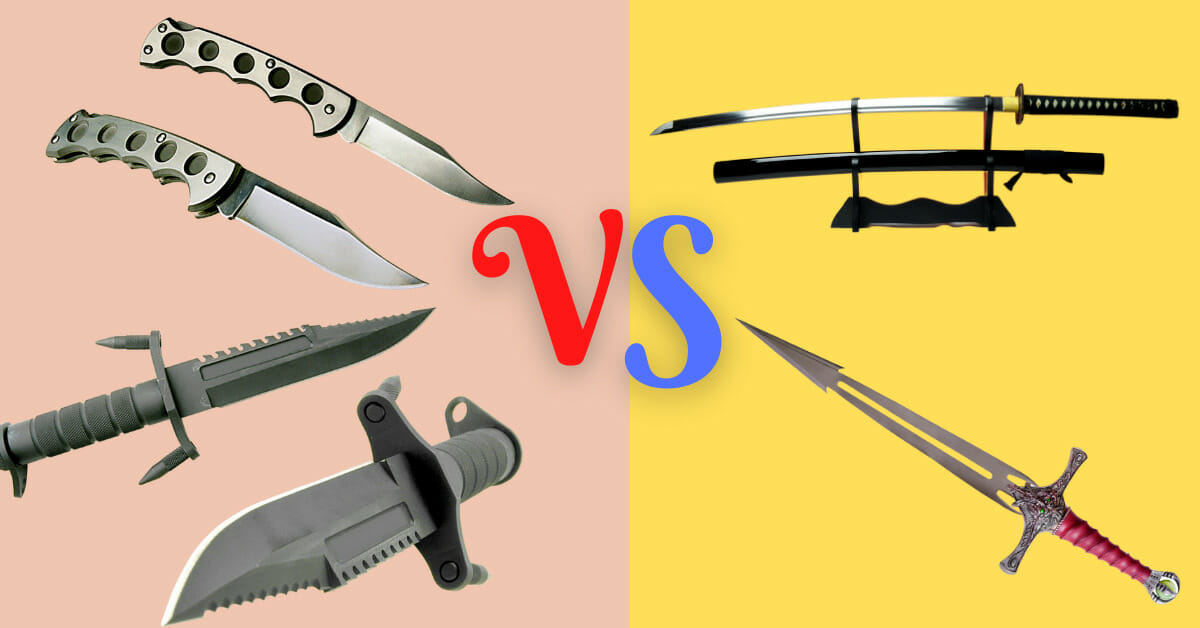 In general, the knife and sword comparison seems simple. However, it is certainly not easy to wind up by saying that one is a tool, and the other is a weapon.

We have to dig at a deeper level to understand the unique characteristics of these two. Let us dive straight into that information.

We can also use even stainless steel. But this can prove to be very weak for making a sword. So, if you want to buy the best sword, make sure you consider the material of its blade.

Stainless steel material is free from rust and corrosion, so it is quite suitable for making knives. Also, you can make it razor-sharp if you like. Keep in mind that its length does not exceed 12 inches because it becomes brittle and loses its function.

In case you make a sword with this material, make sure you use it to hang on the wall only. This is because such material cannot bear the pressure or stress that it is likely to face in a fight. 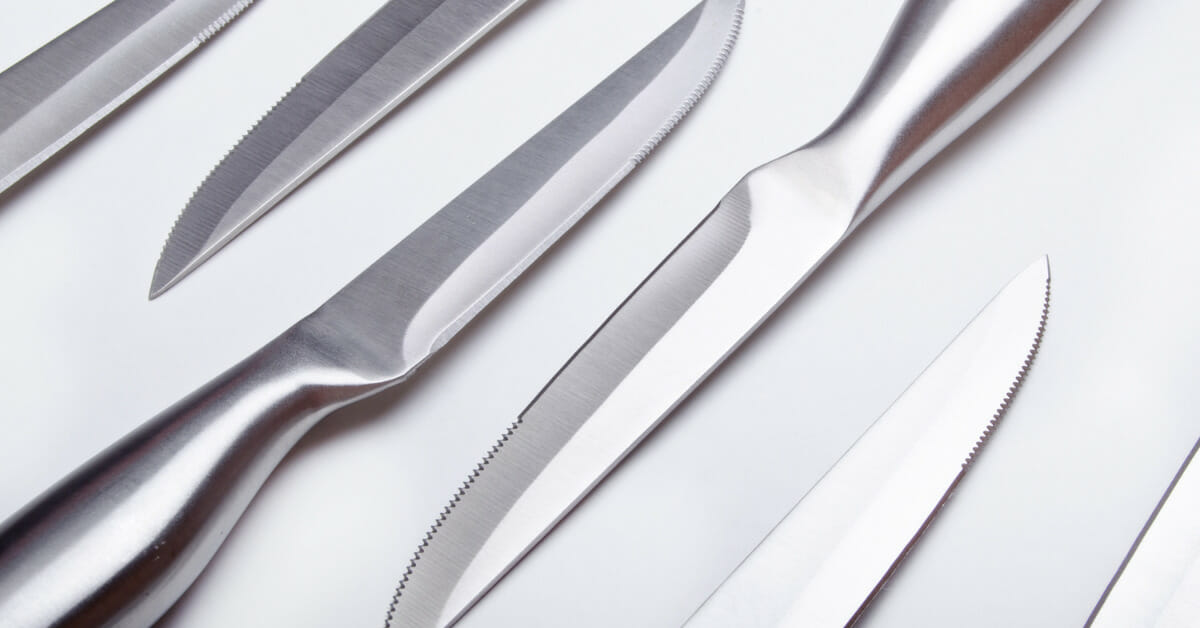 In knife & sword comparison, the sharpness of the blade is an important difference to consider. Knives have blades that are straight and very sharp. However, in the case of swords, the convex edges make them less sharp than knives.

If we consider the strength of a sword, we come to know that it can face the blows without breaking. So, it lies mainly in its swing and ability to counter blows from opponents.

Due to this reason, razor-sharp ends in a sword are not desirable. A sword is made sharp at its curving sections that are likely to hit the opponent.

In the case of a knife, sometimes there are curves to provide extra sharpness, but that is more towards the edges. As we do not put so much pressure on the edges during cutting, so it does not break.

Also, we can sharpen the knife to keep using it for a longer time. Swords cannot handle extreme pressure, so usually, manufacturers avoid making them sharp.

The use of a knife is most common about cutting things at home or office. However, the use of the sword is only to combat attackers on the battlefield or other similar step-ups. So, we conclude that a knife is a tool while a sword is a weapon. This is based on their use.

One exception in their case is the dagger. It is larger in comparison to the knife, but shorter than a sword.

We identify that the purpose it serves is combat, and that is similar to the sword. So, this is also a weapon due to its particular use.

Swords have only one purpose when it comes to their use, that is, fighting and combating. However, a knife can have different uses, but all of them revolve around cutting ad carvings. These include the following:

But generally, a knife should be no more than size inches in length. If it exceeds this length and reaches up to a food length, then we will consider it as a sword.

There is a general understanding that the longer the length, the better would be its fighting ability. If we look into history, swords used to be quite long. It was because soldiers wanted to reach greater distances on the battlefield while keeping themselves safe.

However, if the length gets smaller and smaller, the same thing becomes a good tool. You can use it comfortably for cutting, and it became unimportant for combat/stabbing/thrusting purposes.

It is not about the size, width, or length of tang, but solely about its visibility. It is quite visible from the edges in the case of the knife.

However, in the case of the sword, it is completely hidden inside the structure of the handle.

Due to this Main difference, the German Messer comes under the category of the knife. Even though the length of this knife is almost equal to a sword, but the tang is visible on the edges. Therefore, it is a knife.

It is present inside two separate pieces of wood structure around it. To consider it a sword is not possible because for that it should have a one-piece handle at the end.

Overall, the use of knives and swords is completely different from each other. However, when with knife Vs sword comparison, we come to know that prominent differences include their built, used, and handling.

Along with these expectations or differences, one is meant to be a tool while the other is a weapon. You can consider this point to establish the fact that they belong to two different categories.

Hello out there, Welcome to my blog! This is Teena Vincent, A Passionate Blogger, Home & Kitchen Expert. I always try to keep sharing my knowledge with my readers. Stay Connected & Keep Reading my blog!

The global COVID-19 pandemic is making people feel uncomfortable and insecure about their daily needs. People need to buy basic things to live their lives comfortably in isolation. So, they are...

It’s a cold winter night. You’re shivering and walking towards the fireplace to light up a match to the fire logs, but wait! You haven’t installed the chimney cap yet! And you don’t even know...

Hello out there, Welcome to my blog! This is Teena Vincent, A Passionate Blogger, Home & Kitchen Expert. I always try to keep sharing my knowledge with my readers. Stay Connected & Keep Reading my blog!

AllHomeGuides.Com is reader-supported. When you buy through links on our site, we may earn an affiliate commission.

AllHomeGuides.Com is a participant in the Amazon Services LLC Associates Program, an affiliate advertising program designed to provide a means for sites to earn advertising fees by advertising and linking to Amazon.com.